A MANIFESTO FOR SHORT FILMS 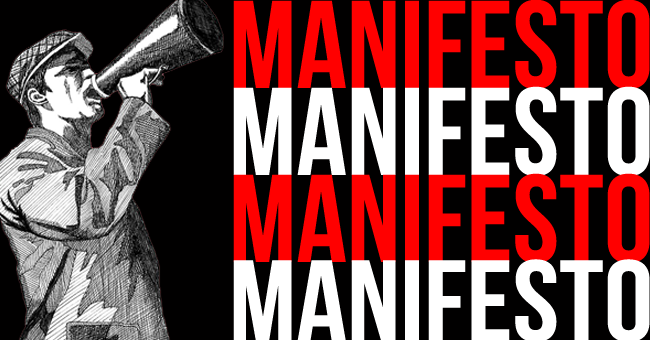 The following is a list of suggestions which you may heed or ignore as you see fit. Mostly, it’s a list of elements we’ve seen many times, and if something has been done many times, it would be worth your while to find a new way to do it. If you’re thinking of making a short film, you will most likely want to find ways to set yourself apart, or at least to avoid cliches or mistakes made by others. No park benches No cafes No establishing shots—Specifically, don’t start a scene with a shot of whatever building the characters are in. This is not The Golden Girls. If you want to establish the location, try doing it creatively, within the action of the scene No random shots of things that are in the location. Some people seem to think this is what a “cutaway” is. If there is no reason to cut to something, don’t. Leave it alone. It’s fine for setting the scene, but not if you’re just trying to add variety to what’s on screen. No scenes where the protagonist stares at him/herself in the mirror No shakycam unless it’s for a particular emotional reaction No Reservoir Dogs knock offs (I’m amazed that people are still making these, but they are. It’s great that you want to emulate your hero, but it’s been done. Maybe instead of referencing movies you like, you should try remaking the movies you hate. That would at least be a bit more creative). No Amelie knock offs (See above—I swear there’s at least one storybook-style magic realist riff at every festival) No Wes Anderson knock offs (See above—I love Wes Anderson, but really, all you’re saying is “I love Wes Anderson”) No covering entire scenes from multiple angles, especially if it’s just a dialogue scene. Pay attention to the sound. Even if the sound design isn’t anything special, it’s still better than bad sound, which is awful and makes a film seem completely amateurish. Film is indeed a visual medium, but that doesn’t just mean take out the dialogue. It means use images, actions, and edits to tell your story. But also, use dialogue, sound and music. You have all these tools at your disposal—make the most of them. No stories about writers. There are many, many professions out there that are far more interesting visually. No stories about writers with writer’s block, who discover a Muse who inspires him (It’s always a him) to write a story that’s basically the film we just watched. Just, please. Especially if the Muse is sacrificed in the process. No films about film-making. It is, however, totally OK to make your film a metaphor for filmmaking. Try to avoid the kind of short that’s just a set-up and a pay-off, where most of it is just illustrating a situation rather than telling a story until the twist happens. If you must make it, keep it short. And maybe find a second twist. People always expect a twist in a short film, they might be surprised by a second one. No films about serial killers.